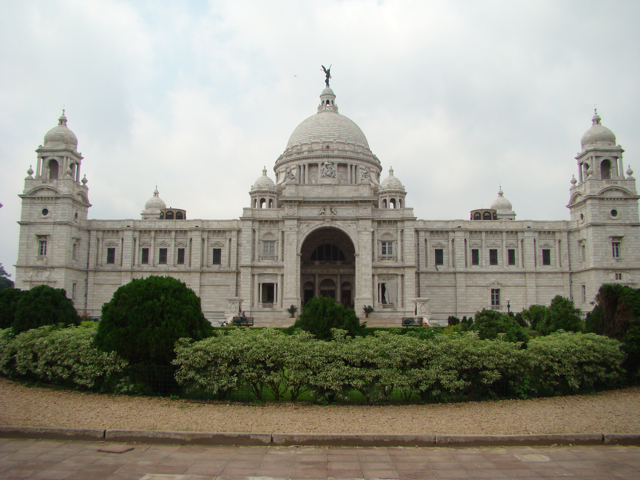 Very early in the morning, I was woken up by the coach attendant’s call that the train had reached Howrah. As I got down, I could see patches of water on the ground. Should be from the cyclone Aila that had lashed out in Bengal 48hrs back, I thought. And now that the cyclone had eased off to a depression, I didn’t have to worry. But before I could go around the city, I had to first dump my backpack at the Sealdah station. I learned that the first bus to get there starts at 5:30 only. So I decided to wait till then. The upper class waiting room wore a deserted look with only the cctv making some movement. The long, old fashioned ‘easy chair’ tempted me to take a small nap. After sometime, I woke up to find that it was already dawn. But it was just 4:45 in the morning. Seems the sun rises early in this part of the country. As I was getting fresh, a look outside the window surprised me. Just outside the station, I could see the beautiful Howrah bridge. I could also see the spectacular line up of the famous orange-yellow ambassador taxi of Kolkata. I was tempted to try that first. For 80rs, I took a prepaid taxi to Sealdah station. I found the city buzzing with activity even at 5:30 in the morning. The streets looked chaotic and in disarray. I reached the station and found a confident ‘beware of rats’ board hanging in front of the cloak room. I hope rats here don’t need my chocolates.

I moved out of the station. One of the targets for the day was to get onto the tram, the only operational tram service in India. I got into a bus to get to Park circus. I saw a tram coming. Another guy jumped onto it. As I was busy photographing it, I could not. Maybe the trams don’t stop for you. The next tram came. This time, I decided to get in. By the time I read where it was heading to, it was too close. I jumped. And somehow managed to scramble in. The tram provided a very low cost mean of travel in Kolkata. But was quite slow. It was just a 4rs ride to Howrah bridge. One particular thing that I noted in here was that, whatever you see around you looks atleast 30yrs old. One exception to this was the Howrah bridge which looked brand new. I walked over the bridge. And was taking photos with the cellphone camera. As soon as I took out the main camera, the passersby warned me against using it on the bridge. I walked across to find a police checkpost with a ‘no photography’ sign. I asked the police if I could take a photo. After producing my ID card, he agreed. But as soon as I pulled out my camera, he politely refused permission. I too smiled back and moved on. I went to the Howrah station, had my breakfast and bought a city map. Enroute the station, I had seen the ferry service and wanted to try it out. From the map, I thought to use it to get to Babughat to go to the Victoria Memorial. As the ferry passed through the hoogli river, I could take clear photos of the Howrah bridge. Now that I had taken most of the photos I needed to, I had the full day left for sight seeing around Kolkata. I saw the Victoria memorial which was a beautiful marble structure around which there was a beautiful lawn and pool. I also visited the museum which had paintings and photos of the old English empire in India. Just outside the museum, I found a small sherbat stall where I thought of tasting the local drink. I had the drink. It was horrible. Yuk.

As I moved on, I saw the Birla planetarium on the side but found that the show would start a good hour later. I looked around and just by its side was the St.Paul’s cathedral, a beautiful church indeed. Went in and found tiny tots practising some action songs there. I took a look around and got back to the planetarium. After the celestial journey, I was back on earth and very hungry. I tried hard to find a hotel by asking others. They all pointed to the stalls at the sidewalk where people were standing and having food. I decided to find one for myself. After a long walk, all that I found was a Barista. Now, if I wanted to have food from a Barista, I could have stayed at Bangalore. So I decided to follow the old saying, ‘when in Rome, do as the Romans do’. I had some stuffed puris which they called ‘sabji puri’ and some gulab jamun. It was good. I moved on. A little ahead, I saw another food stall. They were selling what they call, ‘momo’. It was just 10rs for a plate of 4 momos and a cup of soup. It tasted really great. With a full tummy, I now wanted to see the great banyan tree. For that, I needed to cross the river. I took the bus route and was a 7rs ride to the botanical garden. Now only I got to know that the banyan tree was in fact 250yrs old and was in the guiness book of world records. After taking photos and taking some rest under the tree, I decided to call it a day in Kolkata and return back to the station. On my way back, I stopped at esplanade stop. I saw an entrance which looked like a subway. On a closer look, I found that it was the entrance to a metro station. How could I miss this mode of transportation in Kolkata? I still had lots of time left. So I decided to try it out too. It was amazingly cheap, comfortable and fast. It resembled the Delhi metro with air conditioned stations and magnetic tickets. As I am now in my 1st strategic location, the kind of phase 1 of the trip is complete, covering 2324kms (excluding city travel). While planning the trip, I had also planned about ‘strategic locations’. The idea was that, in case I missed a train, the backup plan would be somehow get to these strategic locations. In this way, a goof up at one point of the trip still keeps the overall trip intact. The other point to be happy about was that I will now be moving from the hot and humid regions to the more temperate places. And thus the journey goes on…

"For my part, I travel not to go anywhere, but to go. I travel for travel's sake. The great affair...