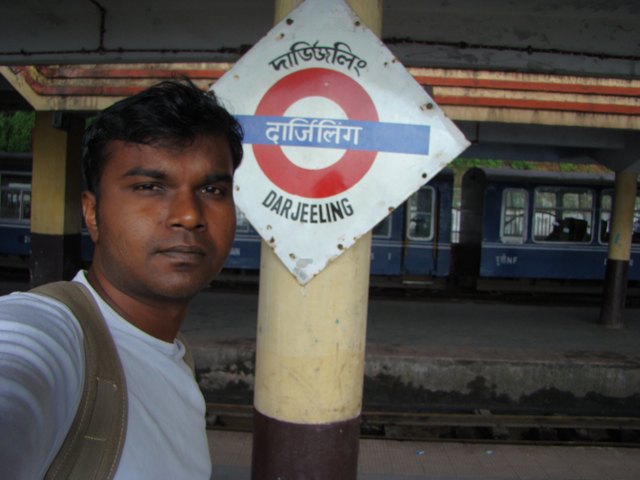 I woke up early in the morning, somewhere in northern Bengal. It was only 5:30 but the sun was way up in the sky. When I looked outside, I felt as if I was back in Kerala. It was beautiful all around with lush green fields and trees. The train finally reached New Jalpaiguri. It is from here that I can take the mountain train to Darjeeling. I finally made up my mind to keep the backpack at the station itself. I had to get to the narrow gauge platform to get to the train to Darjeeling. On enquiry, I came to know that the train was cancelled due to mudslips enroute caused by the recent cyclone. That was a real miss. I started thinking of backup plans like, to delay my Darjeeling leg of the trip and continue on my journey and then come back when the train route is up, etc. In the end, I made up my mind to go on.

Just outside the station, I got onto a shared sumo that would take me to Darjeeling. The bus services were also cancelled. Enroute, I could see the narrow gauge just to the side and often, crossing it. I could also see boards of “we want gorkhaland!” on the side of the road. And there were even some private vehicles that had ‘GL’ for gorkhaland in their number plates. They were demanding a separate state from west bengal. After an hour’s journey we stopped at a roadside hotel for food. I had chicken rice. I also took some photos and then we moved on. Just 5 minutes later, poof… It was a puncture. But the driver changed the tyre in just 10 minutes. So it did not make much of a delay. Soon we passed through the 1st town enroute, Kurseong. There were landslips on the road and the tracks. It did not look as if the tracks would be cleared very soon. My estimate, it should take atleast 3 weeks to get the rail services back on track. So it was a right decision that I took, to go ahead with Darjeeling now itself. It was getting cooler and cooler. I hoped that it would be manageable temperature at the top as both my thermals and jacket were in my backpack at the station. After many traffic snarls enroute, I finally reached Darjeeling. I tried to get a single room. But only double rooms were there in all hotels. Probably because there will be only be a few lone backpackers here in Darjeeling. I finally got a double room in Youth Hostel, since I was a member. Though at a cost of 440rs, it was the lowest in the place with reasonable comforts. The mercury was plummeting by the hour. I got fresh and headed out to the city centre.

First of all, I wanted to do what I came here for – to taste the famous ‘darjeeling chai’ in Darjeeling. The tea did not have much of a colour, but the aroma and the taste was indeed special. Wow. Priceless. You have to be here to know its magic. For just 5rs, I was in a different world. I then went on to the railway station to take a few photos in there. There were different coaches and steam engines at the station. With such a beautiful climate, landscape and people around, I decided to roam around to do some souvenir hunting here. Also, I need to taste that tea again. After that, I’ll head back to my room where I can sleep on solid ground after 5 days.

Very early in the morning, I was woken up by the coach attendant's call that the train had reached Howrah....