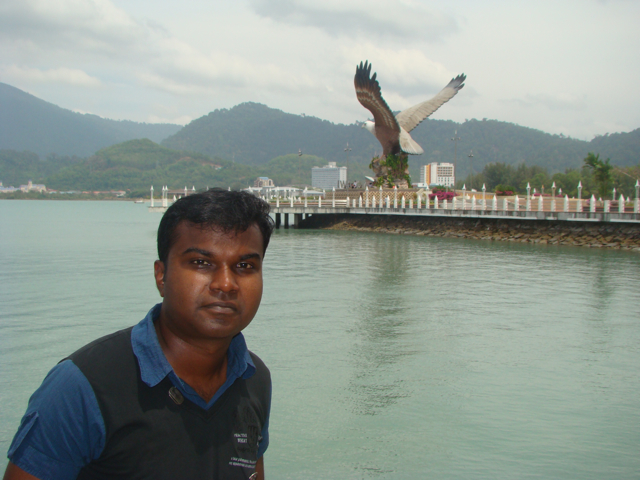 I woke up around 9 in the morning. We got ready, had a normal english breakfast and moved out. Today we wanted to go to the Eagle point at the South-East tip of the island. Getting back on the motorbike and riding through these roads is a experience in itself. Petrol here is pretty cheap at less than 10Rs a litre. And with no public transport available in the island, this should be the cheapest way to get around. All drivers maintained high level of traffic discipline and hence it was easy to ride along. Unlike in India, one need not worry about that “someone” who drives into your lane without any warning. “I shouldn’t get so used to these conditions and expect the same while riding back home”, I hoped. As it was the case yesterday, we stopped at many places to click photographs and moved on. We reached the Eagle point at noon. There was a beautiful sculpture of an Eagle facing the sea. It was very detailed and looked very natural and attractive. “A true work of art”, I thought. This place also has the boat jetty and hence is the actual gateway to the island.

We took a lot of photographs over here and moved on to do souvenir hunting in the shops nearby. We then got back to our motorbike for the long ride back to our guesthouse. The roads were a lot similar and hence we realized quite late that we had lost our way. The one clear sign that you wouldn’t miss from any place in this island is the one to the airport as it has a visual notation. So we finally managed to get back to our place via the airport. We had a wonderful lunch of squid and noodles from a Chinese restaurant nearby. Surely, we could feel the difference in tastes from what we get as “chinese food” back in India. We settled for a quick nap.

When we got up, we got to know the news of the earthquake in Japan. Being on an island, Tsunami was surely a big concern. And to add to it was the fact that our guesthouse was quite close to the beach. I went to the common area where I could find other tourists watching the news on television. Being on the western side of Malaysia, I knew that there shouldn’t be much to worry about. I got to know that the Tsunami was expected to reach Indonesian coast by 7pm local time which is 8pm Malaysian time. Hence I thought that it should be safe enough to venture out to the beach for sunset as planned earlier. We had a relaxing time at the beach during sunset and then went out to the town area. After doing some window shopping, we had an excellent dinner of barbequed fish and noodles. Finally, we took our long walk back to our guest house to settle down in our beds.

Day 2: Biking in a foreign land in Langkawi, Malaysia

A few minutes past midnight, we landed at Kuala Lumpur in Malaysia. The approach to the airport was beautiful with...