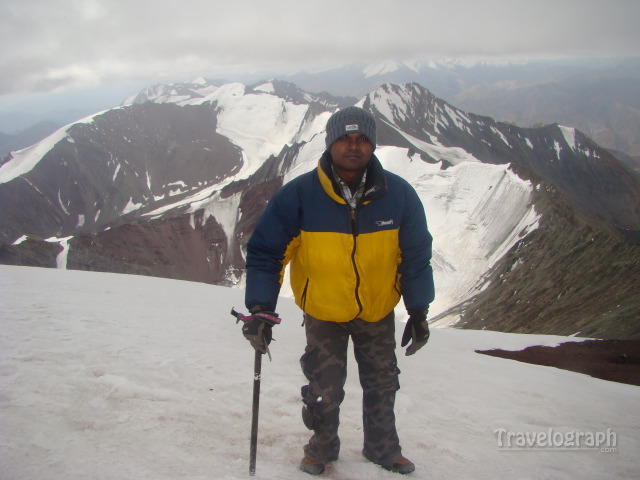 Finally the big day arrived. It was by far the earliest wake up time for me surpassing the 12:30am set in Colombo couple of months earlier. It was 12:am. Temperature inside the tent was 8 degrees thanks to me keeping the tent door open after all that had happened last night. We slowly got out to have a cup of tea and noodles that were prepared for us. We put on all our climbing gear and were all set for the big climb that lie ahead of us.

At 12:30am, we started our climb. Unlike the other days, here the first part of the climb was itself difficult. We had to take occasional breaks in order to get back our breath during the climb. A slip here would send us down a few hundred feet for sure. But we soon climbed over it and we moved on.

The next part of the climb was largely a trek along a slight gradient. It wasn’t that difficult, except the part when we had to walk over rocks, which again was killing our ankles. After walking for nearly 3hrs, by 3:30am, we reached the glacier. Thankfully, there was a thin layer of fresh hard snow over the slippery ice below and hence we did not have to put on the crampons to walk over it. By around 4:00am, we crossed the glacier. 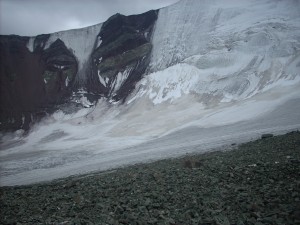 By around 4:30am, we reached the base of the Stok Kangri mountain peak. Now this was “the climb” of the whole trek. The altitude would be anything close to 19,000ft, low oxygen levels, already exhausted bodies and to top it off, it was a very steep gradient! At this point, for every 10 steps we take, we had to take a minute break to catch our breath! And if you take a slightly longer break, the freezing cold outside will get on to you and your joints will start aching, you will feel tired and your limbs will go numb of the cold! So our only option was to move on. But I was amazed at the kind of body heat I was generating to keep myself warm even at that sub-zero temperature.

We pushed ourselves to the limits and finally did the steep climb. By 7:30am, I reached the shoulder to Stok Kangri. A few minutes later, Simha too climbed up. And once he had done so, he announced, “Berty, this is my Stok Kangri!! Take a few pictures of me here, am not climbing further!!”. He was very sure about his decision and I respected that.

I felt very hungry and tired. I knew I had no more energy stored in my body and wanted to get some fast. I had a few packs of chocolates, biscuits and cake in my bag but they just controlled my hunger and not the need for quick energy. Thankfully, I had brought along a RedBull drink which I downed immediately to keep me going.

Koshy was still behind coming up slowly to the shoulder. The Sherpa said that we can’t stay in this place for long as it was at a high altitude and need to attempt the summit as soon as possible. He said that the climb to the summit from here was a little difficult than the one we just had done! But somehow, I never even thought of whether to attempt the summit or not. For me, it was clear. I have come here to climb it and I have to do it.

So by 8:00am, we started again to attempt the summit. From here, the climb gets a bit tricky. One has to do a bit of climbing over the rocks and not the usual trek that we had done so far. Before I started off the attempt, Sherpa told me to just follow him and not to look outside the path I am going. The climb goes through places which is definitely not for the faint-hearted. A look down and you will know that a small slip will send you a thousand feet down!

Before I started off, I told the Sherpa that I had no issue of “fear of heights”, provided my footing is good and I was comfortable climbing on rocks but the only issue I had was getting exhausted as we were at a very high altitude. To this the Sherpa smiled back and said that was fine and I can take my time to climb it. In order to pull me out in case I slipped, he had harnessed me and the rope was harnessed to him as well.

I started off. It was the most exhausting piece of rock climbing I would have ever done. Every 5 steps, I had to take a break. This time, it was not just the deep breaths. I could literally feel my heart pounding inside me! So this time, rather than waiting for my breaths to slow down, I was waiting for my heart beat to slow down before I started again. Part by part, step by step, we moved on. 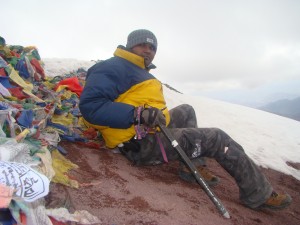 Finally, by 9:30am, I reached the summit of Stok Kangri. Frankly, I could hardly stand at my feet at this point of time. I just sat down at the summit. After resting for around 10min, I got back to my feet and started clicking a few pictures. The view around me at the summit was spectacular. There was no mountain around me that was taller than the one I was on and it was indeed special. The Sherpa burnt a few incense at the summit and offered his prayers. The top of a mountain has significance in almost all major religions around the world be it Buddhism, Christianity, Judaism, etc. There is always some kind of aura that you feel at the summit that I cannot explain. “No wonder all religious texts attach this importance to a mountain summit”, I thought.

By 10am, we decided to start our way back. My legs could hardly do the climb down, maybe because of the 30min break. Even though the climb down should have been relatively faster, I took my own time to slowly climb down the summit. Once we reached the shoulder of the mountain, the harness was removed as it was no longer needed.

By 12:30pm, I reached back at the glacier. I was feeling very warm and wanted to just remove off my jacket.  There near the glacier was our cook, who was waiting with a packed lunch. I was in no mood to have a lunch, but thankfully, he was carrying a watermelon which I happily had. After sitting around for 10min, I started feeling cold. Then I realized that it was just my body heat that was making me feel warm and that I would freeze if I did not put the jacket as I was sitting right next to a glacier!

By 1:00pm, I started back again. Getting down to the base camp from this point was quite easy. You just had to walk the distance. It was a slight downward gradient which made it even easier. By around 2:30pm, I was back at the base camp, 14hrs after I started the trek! I was totally tired and just crashed into my tent to get some sleep. When we woke up, we had the dinner ready for us. After having the dinner, we all settled to sleep.

I woke up to a 5 deg C cold morning at 7am. Black tea was served inside the tent itself....