Day 3, 4: A cruise in the Halong bay in Vietnam 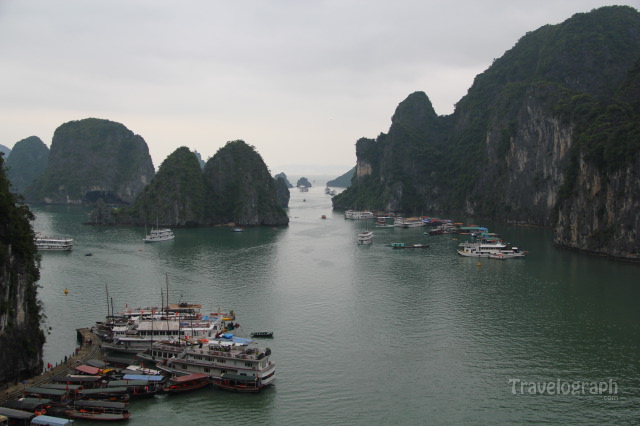 We got up early in the morning and got ready. Today, we were to go to the Halong bay, which is one of the UNESCO world heritage site and is one of the most popular destination in Vietnam. Yesterday, when we booked for this package, we were given three options to choose from; standard (50$), deluxe (70$) and luxury (110$). We were told that the difference between them will be with respect to the boat, the food and the guide. We decided to go for the deluxe package for the 2day 1night trip to the Halong bay.

The bus came to pick us up from the hotel at 8am and we moved on. The journey to Halong bay was said to be long, of around 4hrs, but what concerned me a bit was the fact that there was a slight drizzle going on outside. I hoped that the weather would clear up and we would have a perfect day at the bay. A little past 12noon, we reached the pier area of the Halong bay and our guide took us to a small boat, which again took us to a bigger boat which was going to be our stay for the day. We checked in to our respective rooms and then were served lunch at the boat’s dining area.

As the boat started cruising around the Halong bay as we enjoyed the lunch and the beautiful view outside. First on the itinerary was a visit to the cave. For that, we got into the small boat which took us near to the cave where we had to get down and walk our way up a little. The cave had 3 chambers, the first being very small, the second bigger and the third being very huge. Inside all these chambers, you can see beautiful stalactites and stalagmites made of lime deposits. The chambers were well lit and we took a few photographs and moved on. 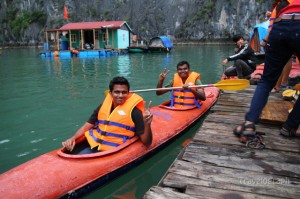 Next on the plan was kayaking and we were all looking forward to trying it. I had a bit of rowing experience on a canoe last year in Phuket, Thailand. So I was quite confident that we would be able to do this easily. We got into a small pier from where everyone was getting into their kayak. We got into it and started rowing out. Soon, I realized that it was a little bit more difficult than a canoe because of the balance and the fact that there are two rowers unlike the canoe where only one person had the paddle! Unless you row in perfect tandem, the kayak is not going to move in a straight line! But soon we adjusted to it and rowed on. After rowing for close to an hour, we returned to the pier to get into our small boat which took us to our big boat.

Back on the big boat, it was time for dinner and after chatting late into the night, we decided to call it a day and settled to our beds in the beautiful boat. 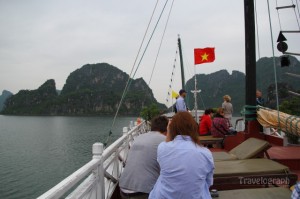 The next day morning, I woke up early after a comfortable night’s sleep in the boat. After having our breakfast, we had time to just laze around on the top of the boat as the boat cruised around the Halong bay. We enjoyed the view, took a lot of photographs and relaxed on the boat top as it cruised along. It finally came to a stop around 11am near the Halong pier. We had our lunch and got out of the boat for our journey back to Hanoi.

To be honest, I did not find the Halong bay to be so very beautiful. For a person who has already been to Phang Nga bay in Phuket, Thailand, the Halong bay in Vietnam may seem to be pretty ordinary. But I have to admit that the Halong bay is much bigger and hence is famous on the UNESCO list. If you want to truly enjoy it, do not go to Halong bay after being to Phang Nga bay! One thing that we had missed in Halong bay was the sailboats which looks very beautiful in this landscape. But since the wind is not strong enough during this month of November, none of the boats raised up their sails and hence they all looked very ordinary to us.

Day 2: A trip to the Perfume Pagoda in Hanoi, Vietnam

I woke up tired at around 6:30am. Twice, I woke up in the night to take medicines for fever. Thankfully,...