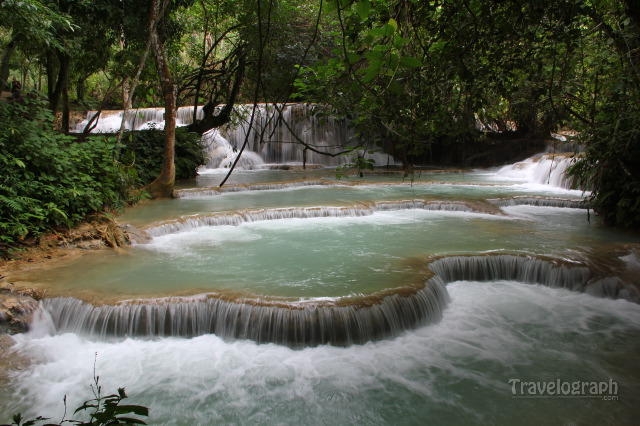 We woke up early in the morning after a night of proper rest after being in the bus for around 34hrs in the last couple of days. We had our breakfast at the hotel and then enquired with the receptionist on places of interest around Luang Prabang. She gave us a map of the town and marked important landmarks that we could visit on foot. She also told us of a beautiful waterfall situated around 30km from the hotel. Since we were up too early, she told that we can walk around the town first and once other travelers too start their day, we can get along with them to go to the waterfall. 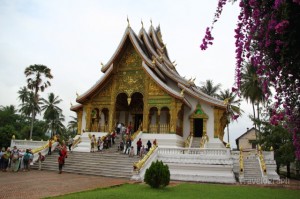 We walked out of the hotel. The town of Luang Prabang was a beautiful place situated on the banks of the Mekong river. The streets were clean and we could see tourists all around. There weren’t much of traffic too. We reached the museum which in itself was a beautiful building. Since both of us weren’t interested to get into the museum, we walked around it, took some photographs and moved on. Soon we reached the bank of the Mekong river were small boats were cruising along. We could also see a lot of restaurants on the bank of the river and there were some who offered a 3hr Mekong cruise. Since we had to get back to the hotel for our day trip, we decided to skip the Mekong cruise and got back to our hotel. 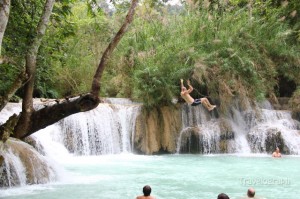 The receptionist arranged a tuk-tuk for us and few other tourists to go to the kuang Si falls for 35,000 Kip per person. We got into the tuk-tuk and moved on. The ride was fine as the tuk-tuk moved on through good countryside and soon we reached the parking area of Kuang Si falls. We got down from the tuk-tuk and took the trail towards the waterfall. We walked on for 10min through the woods. At a distance, we could hear the sound of flowing water. It was surely a beautiful walk through the woods with the trail clearly marked but it was not until the we reached the pool that we really were amazed! It was a tropical dreamland! Out in the middle of the forest, there was this beautiful pool of turquoise blue water! We found that the whole waterfall was in the form of small steps with such pools around it. We walked a little up the falls where there was a larger pool of water and people were swimming in it. There was also a “tarzan swing” on which people can swing into the water! Being a non-swimmer, I decided to stay out of that swing. But sujith on the other hand was thrilled about the idea! He climbed over the tree and held on to the swing and jumped into the water. It was a definitely an amazing place to be!

Since I did not want to miss the opportunity of getting into the turquoise blue water, I decided to get into the shallow areas of the pool. With Sujith gauging the depth around me, I happily followed him and had a wonderful time swimming(am not too bad either!) in the pool. Definitely, this waterfall was the highlight of the entire trip. I was so happy that I decided to visit this country of Laos! After being in the water for some time, we decided to trek further up the stream. After walking up a little, the sound of the water became louder and louder and finally, we could see the bigger Kuang Si waterfalls! We could have easily missed out on this waterfall after spending so much time down the stream enjoying the beautiful pools and streams below! We clicked a few photographs and moved back to the tuk-tuk.

We then took the route back to our hotel and reached there by evening. This also happened to be the time that the night market opens in Luang Prabang. After around 5pm, one of the main roads is blocked for traffic and makeshift stalls are erected in the middle of the road where people sell their goods. That is how the night market operates in Luang Prabang. The goods sold here are generally targeted at the tourists with clothes, bags, jewelry and other souvenirs. We walked around the night market and bought a few souvenirs and then got back to our hotel. With memories of the beautiful pools downstream the Kuang Si falls, we decided to call it a day.

It was around 5:30pm that one of the bus agent came to our hotel and asked us to get into...