Day 3: Enjoying the sunrise over Annapurna from Sarangkot, Nepal 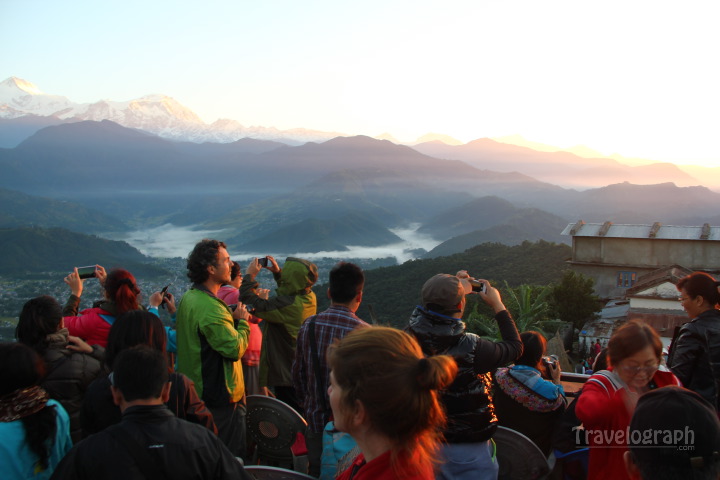 It was yet another day of early wake up here in Nepal. Today, we were to go and watch the beautiful sunrise over the Annapurna mountain range from Sarangkot. By 5:30am, our driver who was to take us to to Sarangkot had come to our hotel to pick us up. We got into the car and were on our way to watch the sunrise.

Since we had a full day out here in Pokhara, we decided to go on a sightseeing trip in and around Pokhara. As a part of that, we asked for the trip to watch the sunrise from Sarangkot which is around 10km from here. We got a deal for around 4000 NPR for the entire sightseeing package. 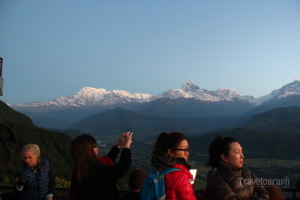 The road to Sarangkot was winding, narrow and bumpy. To make it worse, there was a jam of vehicles towards the top. Thankfully, we made it to the top before the sunrise. We got to the view point and could now see the majestic Annapurna range in front of us very clearly. It was truly breathtaking. By around 6:30am, the sun rose and the glow over the snow clad Annapurna range gave it a golden shine which made it all the more lovely. We clicked a lot of photographs till the sun was fully up. We then got back to our car and our driver dropped us back to our hotel.

After having our breakfast at the hotel, we set out again for our sightseeing trip. First stop for us was the International Mountaineering museum. Though both of us were not the museum tourists type, I was interested in this one since it was about mountaineering. We got the tickets and entered the museum. Since the documentary show in the museum was to start in 5min, we decided to watch it first before we looked around the museum. The documentary was based on the Mt. Everest region. It showed the people in the region and the regular sights which a mountaineer would see as they climb Mt. Everest. I totally enjoyed the show. After the show, we walked around the museum which had artifacts of the native people of the mountain region and many photographs of the highest mountain peaks in the himalayas. 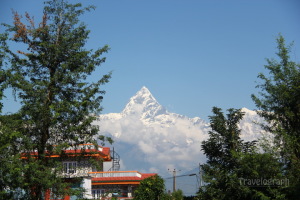 We got out of the museum and moved on. What I really liked about Pokhara was that where ever you go, you have the picture perfect backdrop of the snow clad Annapurna mountain range! Our next destination of the day was the Devi falls. This falls was unique because the entire falls was below the ground. The stream flows down towards a deep gorge below. Its quite loud for its size! We came back to the entrance and after having a plate of momos, we got into the Gupteshwar Mahadev cave which was right opposite the entrance to the Devi falls. In fact, the gorge that I mentioned where the water from the Devi falls was going to can be seen going down the cave!

We got back from the caves and moved on to our next destination. We passed through the old market to reach Mahendra cave in North Pokhara. This cave is small and is famous for its religious significance. Hence we didn’t find it interesting. For our last destination for the day was the Setu river gorge. You can see the narrow and deep gorge over the bridge that runs across it. Interestingly, the bridge also carries a tunnel of water over it! We got back to our hotel, tired and took some much needed rest. In the evening, we walked along the lakeside and had momos again for dinner!

Day 2: Traveling by bus from Kathmandu to Pokhara, Nepal

My morning alarm and the hotel's wake up call went off almost simultaneously at 5:30am in the morning. Today, we were...