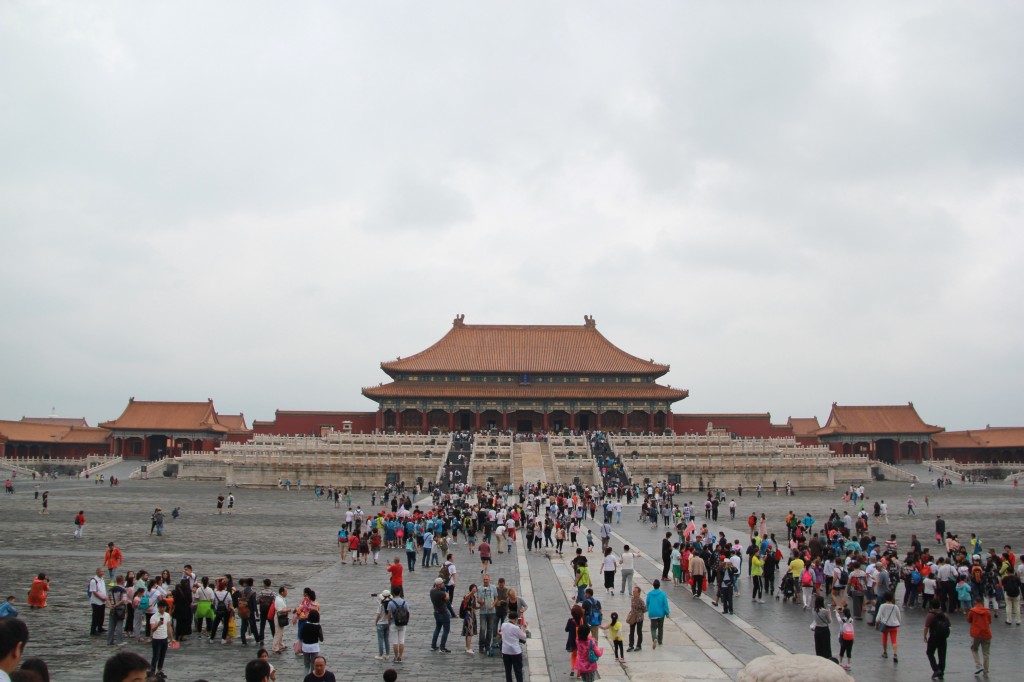 We woke up to a cloudy morning here in Bejing. Thankfully, the weather had cleared up. It was no longer raining even though it was still cloudy. Given this let up in the weather, we decided to visit the Tiananmen square and the Imperial Palace. Both these places are right next to each other. Also, if you look at the subway map, you can see that these places are almost at the central of Bejing. There is even a subway line that encircles it though not so closely. 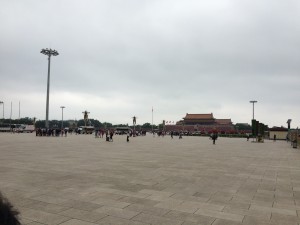 After having the breakfast at the hotel, we once again took the subway to reach Qianmen station on Line 1. We got down and started walking towards the Tiananmen square. There are lot of historical significance to this area and it is indeed a place worth visiting. We walked towards the Square and before entering the same, everyone has to go through a security check. Also, you need an identification (such as passport) to enter. This is something we have observed in China. Ensure that you carry your passport along as you may require to show the same even during buying entry tickets in historical monuments. 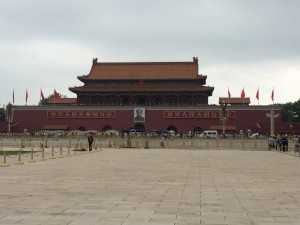 We took pictures at the Tiananmen Square and walked towards the Tiananmen gate. Mao’s picture was prominent on this building and it is through this gate that you enter into the “Forbidden City”. This is also called as the Imperial Palace. This was the abode of the royalty during the dynasty rules right from the 16th century. 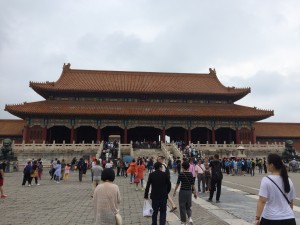 We took the entry tickets and got into the Imperial Palace. The layout of this palace is a set of halls each separated by a courtyard. Each of these halls have a religious significance and is used for a specific religious purpose. Being built of wood, each halls have large copper vats for storing water for fire fighting purpose. The tourists have to enter from South and walk towards North for the exit. It was definitely a place that you shouldn’t miss in Beijing, but remember, that it involved a lot of walking inside the Palace.
We exited through the North gate. We were very tired of walking and wanted to get back to the nearest subway. There were local buses that would take us to subway lines, but given that the boards are all in Chinese, we didn’t want to take those. There were a few sightseeing buses that were lined up. Since we could read the destinations for these buses in English, we got in. Like in any other sightseeing bus, the windows were quite big and the attendant started describing the sights outside. However, since he was talking only in Chinese, we didn’t have a clue of what he was saying!
We passed first around the side of the Imperial Palace and then through the Wangfujing street, which, as the locals describe it, Bejing’s 5th Avenue (New York fame). It has some of the biggest brand showrooms including major fashion luxury brands and even an Apple store. As the bus moved closer to Qianmen, we saw a subway station and immediately we got down the bus. We got into the subway to get back to our hotel.

After taking a quick nap in our room, we set out again. This time, our destination was “snack street” which was a walkable distance from our hotel. The nearest subway for this street will be Nanluoguxiang in Line 8. There were plenty of small eateries in this street and we really loved this place. After trying out a lot of street food, we decided to take the subway back to our hotel.
berT & Sarah
23.06.2017
Location: Beijing, China

Day 2: Seeing the Giant Panda at the Beijing zoo, China

After the tiring day yesterday, we woke up late and decided to head out to explore the city. Looking out...