Day 3: Scuba diving into the waters off the Boracay coast, Philippines 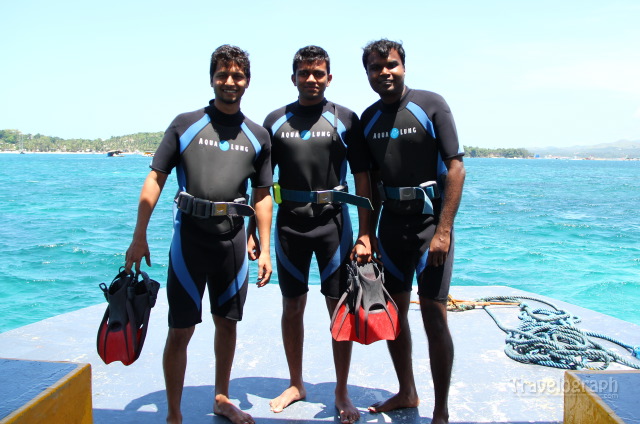 We got up at 8:30am. Today, we had to first en cash our traveller’s cheques. So we got fresh and proceeded to the Bank of Philippines Islands (BPI), which processes the traveller’s cheque here in Philippines. Thankfully, we got the cheques encashed without much hassles and we proceeded to do some adventure activities in the island which we had negotiated with the hotel guy yesterday.

Yesterday night, while walking on the beachside, we noticed many scuba dive centers. To be honest, I was not at all keen on diving as I was a non-swimmer. But what amused me was the interest shown by Agarwala who was also a non-swimmer! Sujith was very sure that he was going to do it, and rightly so, as he was a decent swimmer. We enquired at the dive centers for taking the dive and the first question they asked us was, “do you have a scuba license?”. “Hahaa!”, I felt like laughing at ourselves, thinking, “forget the scuba license, wait till he hears that we do not even know to swim!” We enquired at three dive centers and two of them said it wouldn’t be a problem while one opined that it isn’t recommended. So we decided to google it up. Again, the opinion was divided on whether non-swimmers can scuba dive. So finally, we decided to anyways try it in shallow waters and then decide for ourselves whether to go ahead with the scuba dive or not.

It was 12:30pm and we walked into one dive centre and registered for the dive which costed 2500P. I have no clue what made me to sign up for it, but I decided to give it a try. We got into a small boat that would take us to the diving boat. Sitting on the boat, my previous experiences with water was flashing in my mind. The wave going over my head again and again during the Catamaran dive off the coast of Chennai, mask constantly getting filled up with water while snorkeling off the coast of Thailand, and the partial drowning off the coast of Manipal while trying to gauge the depth of the beach which made me stay out of open water for a very long time and the list goes on. But somehow, I was sure that I wouldn’t go ahead if I wasn’t confident of doing it.

We reached the the dive boat where we met our dive master. And obviously, the first thing we mentioned to him was that myself and Agarwala were non-swimmers! He was quite cool about it and that helped me gain some confidence. He explained the various parts of the scuba diving equipment and how to operate it, which we all listened to very carefully. Next, he taught us the basic signs/gestures to signal to the dive master in order to communicate under water. Some of the signs we learnt were for saying “am ok”, “going down/up/left/right”, “stay together”, “come closer”, “kneel down”, and most important of them all, the gesture to communicate, “am not fine/there is a problem”. Having learnt all these gestures, we were then taught how to put on the diving gear, the breathing techniques and other things like ways to equalize the ear pressure as you go deeper and to clear water off the goggles. And finally, we were asked to put on the diving suit. I was still tensed. I knew I could call it off anytime but decided to at least give it a try. Sitting by the side of the boat with the oxygen cylinder and all those diving gear on, finally it was time to put on my goggles and the breathing mask. There wasn’t a problem so far. I was comfortable breathing through the diving mask but I knew things would be different once I get into water. First to go off the boat was Agarwala and then Sujith a couple of minutes later. It was my turn next. As instructed, with my palm on the breathing gear, fingers on the goggles and the left hand at the back of my head, I took the plunge.

Bloom! I was inside water. But thanks to the Buoyancy Control Device (BCD), and to my relief, I was above water in no time! Holding me was the dive master who gestured to me whether I was fine. I gestured back and he asked me to practice breathing underwater. He controlled the BCD valve to lower me a little and there I was, inside water, breathing through the scuba equipment for the first time inside water. At this moment, though everything was working perfectly, I still was in no mood to let go off the dive master and my hand was strongly holding onto his shoulder. Minuted passed, and the dive master tried to move above me to take me inside water. “No chance”, I thought to myself. I gestured to him the distress signal and upwards sign and to my relief, he opened the BCD valve which shot me up above the water again. “What happened sir? Is there a problem?”, he asked. I just gestured to him that I need some time to settle in. He understood that and took out his breathing gear and spoke to me that he wouldn’t lower me until I get absolutely comfortable with the breathing. So I gestured him back that all was fine and to take me down. Poof, out goes some air out of my BCD and I am again lowered into the sea.

This time, he held me from the back of my diving gear and I felt quite comfortable that way. After equalizing my ear pressure, I again gestured him to lower me further. These steps continued until I reached the sea bed where I could see Sujith and Agarwala and I too joined them. 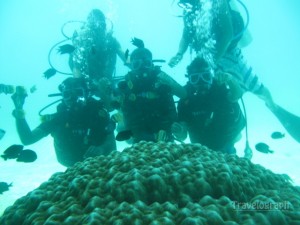 Once on the sea bed, all my fear and apprehension just disappeared. I was now looking at the beautiful sea bed around me full of colorful corals, brightly colored fish and other marine life. It was surely the most beautiful thing I have ever seen in my life! I never thought that such a beautiful world existed below the water! I was absolutely overwhelmed by the beauty around me that I was now smiling at myself on what I would have missed had I decided not to scuba dive! We were now given some food to feed the fishes, which basically would attract the fishes around so that we can get some good photographs with them swimming around. We moved around amazingly beautiful corals, posed for photographs, and even touched some fish. It was really amazing to have all those beautiful fishes swimming around you and you moving along just like one of them! This was truly one of the most amazing moments of my life!

After 30min of dive, we were told that we had to go up. Reluctantly, we had to leave this beautiful under water world for our boat. Again, air fills in the BCD and we shoot up above water. Another dive crew pulled me up the boat with the heavy dive gear that was on me. We removed our diving mask and now, we could talk! All of us were so thrilled and we looked at each other as if we just returned from some fantasy land! There was smiles, laughter and absolute amazement as we climbed back the boat. The beauty of the world under water was yet to sink in for us. We then took the small boat ride back to the shore.

Back in the shore, we wanted to go down again and so decided to try the smaller and easier version of the scuba dive, called the helmet dive, which was basically diving inside water with a helmet filled with air. So again, we registered for the helmet dive which costed 400P and waited for the boat. 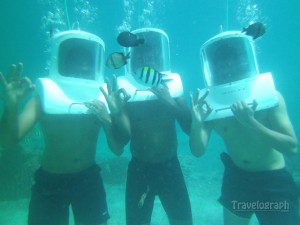 After getting to the dive platform, we were explain some technicalities of this dive and lowered down with the helmet, which weighed 30kg above water! There were two scuba divers who were our dive masters and unlike the scuba dive, here, we just had to climb down a ladder to the sea floor. But after the scuba dive, this was a big disappointment. Mobility was greatly restricted due to the tube attached from the helmet to the boat and also the vision too as the helmet gave only a narrow field of vision. So we learnt that a helmet dive should never be tried after scuba dive! You will surely be disappointed, not because the helmet dive isn’t great, but because it is nothing in comparison to the scuba dive! But in spite of all that, we had good fun with the helmet dive as we played around walking on the sea floor, gesturing to each other in the standard sign languages and the new gestures we invented right at the sea floor making each other laugh. 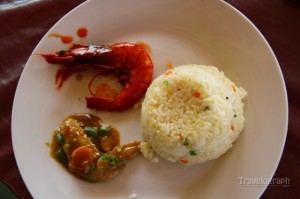 After spending around 30min at the sea floor, we climbed up the ladder into the boat and soon we were back at the beach. Since it was getting late, we decided to just grab a fruit juice and proceed for our trip around the island in a small boat which costed 500P pax. So we moved on in this small boat taking a look at the beautiful beach from the sea. Since we did not have our lunch, he got near the Puka beach near Shangri La. We settled down for lunch, ordered some chicken and prawn dish. Soon the food was provided and the chicken curry here was one of the best I have had in a very long time. After the wonderful meal, we got back to the boat. 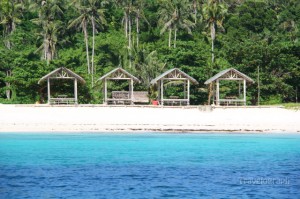 As the boat went to the eastern side of the island, the sea suddenly changed and was extremely choppy. But the view of the rock faces on the island was extremely good, much like the ones we find in Western Thailand. After a long ride around the island, we were back at the white sand beach near our resort. Since the sun was setting, we decided to again take a dip in the sea enjoying the sunset before getting back to the resort. After spending some time in the water, we came back to the resort, got fresh and once again went to the beach to have our dinner. And here we are once again, enjoying the music played by this live band out here in Boracay, Philippines.

6 responses to “Day 3: Scuba diving into the waters off the Boracay coast, Philippines”