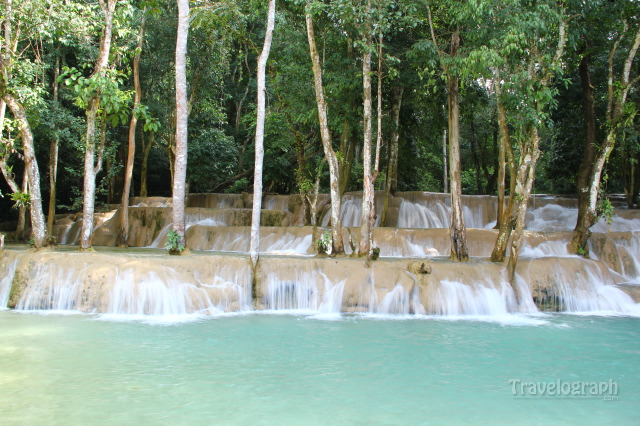 We woke up early in this beautiful town of Luang Prabang in Laos. We got ready and decided to move out of our hotel. Unlike yesterday, when we shared a Tuk-Tuk to see places, today, we decided to rent out a motorbike. For 100,000 Kip, we got one and started off our journey. The roads were good and there weren’t much of traffic too. The only difficulty we had was to keep in mind that we had to drive through the right of the road unlike what we are used to in India. Soon we got used to it and moved on.

Today, we were planning to go to the Tad Sae falls, situated around 26km from Luang Prabang. After riding along the road to Vientiane, we took an unpaved road to the left, marked by a huge banner for the Tad Sae falls. After riding along for a kilometer in this road, we reached a place to park our bikes. After paying the parking fee of 2000Kip, we walked further down to reach the river. 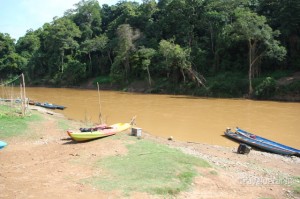 Near the river, we could see a kiosk from where we bought return boat tickets for 10,000 Kip. We got into the small boat and I have to admit that it was the most unstable boat that I have ever been on! Though unstable, the motorized boat slowly moved down the stream. 10min later, the boat pulled over to the other side of the river. We got down the boat and again started walking the trail to the Tad Sae falls. We took the entry tickets and got in. The sound of rushing water became louder and louder as we got closer and closer. Finally, we could see the beautiful turquoise blue colored water of Tad Sae. “This seems to be the trademark waterfall color in Laos”, I wondered!

Though the color was much similar to the Kuang Si falls that we had seen the previous day, the Tad Sae falls was much smaller and wider and had multiple steps as compared to Kuang Si falls. Also there were trees that we standing right in the middle of the falls which is kind of surprising as to how they are able withstand these eroding force of water for all these years. But anyways, the water wasn’t gushing at a mighty force even though this was the end of the rainy season here in Laos. So maybe, that kind of explains why the trees continue to stand in the middle of the falls! 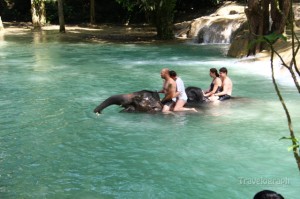 We walked around the falls and we could see tourists taking a baby elephant ride right inside the waterfalls! From a distance it looked a bit adventurous as the elephant sometimes almost gets inside the water with the people on top of them having to precariously holding onto the elephant in order to keep them from falling off into the water. For the tourists, there was also a zip line over the waterfalls that would take you just a few feet over the falls between the tall trees. We decided not to try the baby elephant ride or the zip line and took a dip in the beautiful waterfalls instead.

After an hour of swimming in the water, we walked back out of the waterfalls and moved on. We got into the boat that we had come in and got back to our bike and rode back to Luang Prabang. Since there was still sufficient time for our bus to Vientiane, we took a walk around the night market area and got back to our hostel to get our luggage and get into the tuk tuk that came to pick us up from the hostel. We had booked bus tickets to Vientiane through our hostel lady for 160,000 Kip for the “VIP sleeper bus”.

We arrived at the Luang Prabang bus stand and got into the bus at 8:30pm. The bus was decent but was quite crowded. But still, we felt comfortable and went to sleep with great memories of this beautiful place called Luang Prabang. I was glad that chose to visit this place in my lifetime!

We woke up early in the morning after a night of proper rest after being in the bus for around...