One of the most popular day tours from Krabi is the “4 island tour”. As I was researching earlier, I had marked to take this tour while in Krabi. As it was the case yesterday, the tour guide picked us up from the Hotel and took us to the boat jetty. We got into the boat and started our tour. The first stop for us was the Railay beach nearby from where there was a family who were to join us for the tour. The Railay beach is famous among rock climbers and is one of the secluded beaches in Krabi. While in Krabi, this may be a good option to stay in apart from the Ao Nang beach. However, the Railay beach, is accessible by boat only! One must keep in mind the logistics involved if opting to stay in this place. 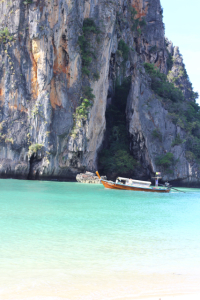 As the family got into our boat, we moved on. Our first destination for the trip was the Phranang beach. As expected in Thailand, it was a beautiful white sand beach and thankfully, we were the first boat to arrive there. So for the first few minutes, we had that entire beach for ourselves. We got into the water, played around for a while, clicked photographs and then relaxed by the side of the beach. After a while, we got back to our boat for our next destination.

As we moved on, the sea got quite rough and we were tossed around on the speedboat as it hit each wave enroute. After about 10min, we reached an island called the “Chicken island”. But true to its name, we could find a huge rock in the shape of the chicken which gave the island its name. We clicked few photographs and then moved on. On the other side of the island, the boat stopped for a while for a snorkeling break. And as was the case yesterday, only those who knew swimming were allowed to venture out. So we stayed back in the boat. 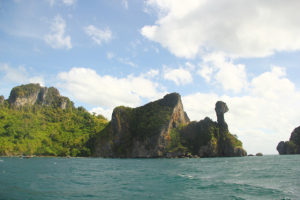 We then moved to an island called the Poda island. This had probably one of the largest beaches among the islands that we were in so far. And so was the crowd. There were a lot of tourists on the beach. Sun was up and I was surprised at the day temperatures here in Krabi even though it was only January. We just settled by the beach in the shade to relax. Sarah took out her book to read and I took out my iPhone to listen to some soothing music. And with the wonderful place that we were in, it was indeed perfect! 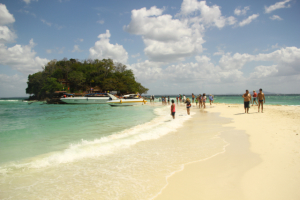 After a while, our lunch was ready and we had Thai lunch at the beach. Though it wasn’t as fancy as it was yesterday, it wasn’t bad either. We had our full and got back to our spot to relax. A little later, we got back to our boat to get to the fourth and final island in this tour, the Tup island. The speciality of this island is that during low tide, there is a sandbank that forms between two islands.

We got down our boat and we could see this long sandbank that forms a path between the two islands. It was indeed a beautiful place to be in. We clicked a few photographs before we settled by the shade on one of the islands. After spending a good 30min, we got back to our boat which took us back to the mainland.

There are some places in my travel map that I can never forget. Of all the beaches that I have...