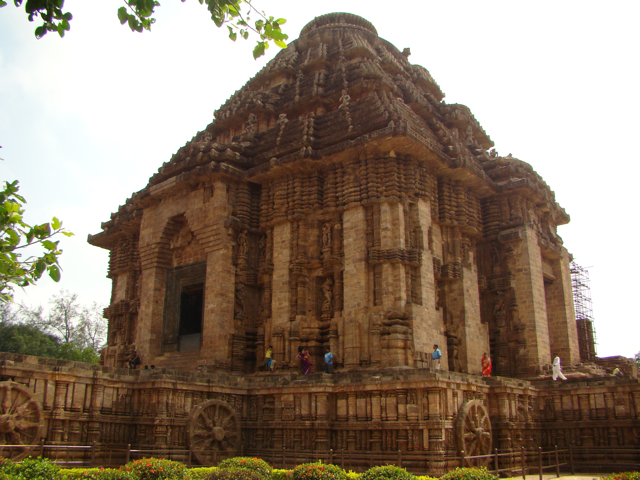 “For my part, I travel not to go anywhere, but to go. I travel for travel’s sake. The great affair is to move.”

I could see parched fields upto a long distance as I took my first look outside the window. The farmers were preparing the fields by ploughing and manuring early in the morning. They were waiting for the monsoon which is due in a few weeks time. And here, I was trying to evade that. As I stepped outside, I found that it was a very warm morning. So there should be a pretty hot day too, I thought.

I could not find a good refreshment stall. So had to be content with fruit cake, chocolate and a cup of coffee for breakfast. I got to a passenger train which would take me to Puri for 10rs. Travelling like the locals was my kind of travel. After passing through the beautiful countryside, I finally reached Puri after a good 2hrs with the train stopping at each station enroute. After enquiring the return train timings, I then walked 2kms to the local bus stand to go to Konark, which was my destination for the day. I was tired after the walk in the hot sun. Thought of having a glass of roadside sugarcane juice. But it tasted more of diesel than sugarcane. So I took my first can of energy drink to get refreshed. The mini bus passed through the literal gallis of Puri and finally entered the marine drive road. Though long, I took this route as the 35km marine drive was the longest I would have done yet. The bus passed through Balukhand wildlife santuary. However, I was not lucky enough to spot any black buck or deer enroute. It was a 15rs ride and took me an hour to reach Konark from Puri with the bay of bengal on the side. I headed straight to the sun temple (a UNESCO world heritage site). It was amazing to find that it was built back in the 13th century. Awesome, is the word I would use. After having a look around and taking lots of photos, I headed out of the complex. I bought a small replica of the wheel of sun temple as a souvenir. I had a typical Marvadi meal from the nearby restaurant and headed back to the bus stand. I came to know that Bhubaneswar was a mere 2hr ride from here by bus. So I decided to try the new route. And it took only 30rs for my bus ride back to Bhubaneswar. I wanted to jump back into the cool confines of the train after the long day out in the sun. And thus, the journey goes on…

3 responses to “Day 3: In the temple city of Bhubaneswar”

After a comfortable night's sleep, I woke up today morning near the hyderabad suburbs which was my first stop-over. I...