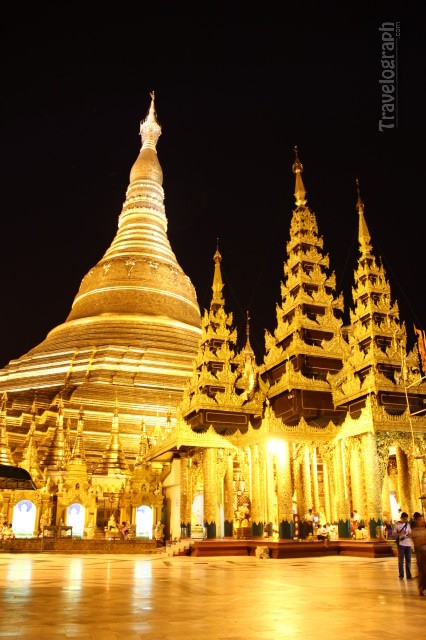 After a perfectly botched up attempt to run a marathon in the Kuala Lumpur marathon 2012, thanks to a flight delay, I summed up my wits to proceed with the rest of the trip. Today, we are flying to Yangon, the former capital of Myanmar (Burma) and joining me in this trip is my TAPMI batch mate, Sujith Nathan. To be honest, Myanmar was never on my travel radar until last February when I decided to take part in the KL Marathon. Since I had to anyways fly to Kuala Lumpur, I decided to fly to another country as well from here. Finding cheap flight tickets from Kuala Lumpur to Yangon, I decided to travel to this mystic country of Myanmar.

As I started my travel research, there wasn’t much of information or travel posts I could find on the internet from other travelers. So with whatever information I could gather, I decided to take a look at this country for myself, which is largely cut-off from the rest of the world for the past decades thanks to the heavy sanctions imposed by the US and the European Union. This was one country which still was ‘pristine’ in travel terms and hence I thought it would be a different ‘travel experience’ compared to the other countries that I have been to in Asia.

It was five minutes past six in the evening when the pilot announced the landing into Yangon international airport. Opening up the window shade, out through the window I could see the aircraft approaching the Myanmar coast. But surprisingly, right from the coastline, I could see paddy fields to the eternity unlike the usual densely populated coastlines that we see in many other countries. There were no forest cover, no signs of habitation, and all I could see from the aircraft were these paddy fields full of water and the Yangon river. “The monsoon season is in its peak”, I thought.

We landed at Yangon international airport in a cloudy 6:25pm evening and I found the airport to be really beautiful. We cleared the immigration in no time and got out of the airport. 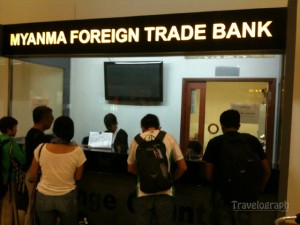 We met our hotel guy just outside the airport as we had asked for a pick-up beforehand. And thankfully, he directed us to get our currency exchanged at the exchange centre in the airport itself. Alright, let me share some information about the financial system in Myanmar. As I had mentioned about the sanctions, they also include financial sanctions and hence companies like Visa/Mastercard, that usually clear the finances over the borders are not allowed to clear transactions from Myanmar. Hence, there is no way you can withdraw money from any ATM(which currently does not exist) in Myanmar. The only way is to exchange USD/EUR/SGD currency notes to the local currency. I had heard a lot about the Myanmar currency exchanger’s reluctance to accept soiled/creased/old/CB-series/etc notes on the internet and I was a little worried since the best US Dollar notes I could get back in India could in no way be labelled as “crisp” or “as brand new”. But thankfully, they never had a problem with the notes and immediately let us convert it to the local currency, Kyat (pronounced ch-iat; ‘ch’ as in ‘change’). And surprisingly, the conversion rates were also quite better compared to that we saw on the internet. So once we got the local currency, we moved out of the airport.

On the way to our hotel, we met Andrew, from United States, who was also in the same flight as ours from Kuala Lumpur and staying in the same hotel. What caught my attention was that he was wearing a finisher’s T-shirt of the KL Marathon. So we explained to him how we missed the marathon due to a delayed flight and all that, and asked him about his plans in Myanmar. Since he too was on a short trip like us and being quite jovial, lively and looking much of our age, we decided to team up with him in Myanmar. (Note: We later found out that the guy was actually 50yrs old! :O)

It was a long drive through the city and there was quite a lot of traffic on the road. One thing I noted was that, here, the traffic moves along the right side of the road, but surprisingly, 90% of the vehicles were right hand drives! Why would they do that? I have no idea! After an hour’s drive, we reached our hotel. 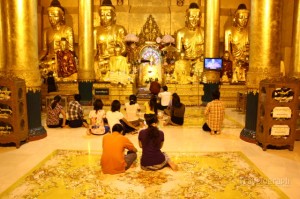 Since we did not want to waste any time in Myanmar, we decided to just drop off our luggage and head out into the city. We took a taxi to the Shwedagon Pagoda which was a must visit place in Yangon. It was truly a beautiful structure that was huge and well lit too. We got into the pagoda after paying an entrance fee of 5$. Another thing I noticed here was that establishments generally accept money in USD also. So the best option is to ask them how much they charge in USD value and how much in Kyats. Whichever currency you find the exchange rate to be better, pay up in that. I did not find any particular pattern here, but in some places, its better to pay in USD and in some, Kyats. So ask about the equivalents before you pay. But taxis generally will quote in Kyats only.

We got into a elevator to get us to the level of the pagoda and walked in. It was an amazing sight, especially since the entire place was so well lit. 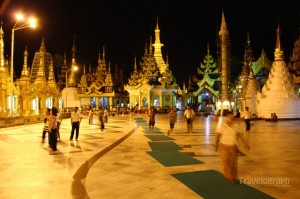 We walked around in amazement and took photographs of this beautiful structure. Around us, there were many local people who came here for prayers as it was a religious place for the Buddhists. As we were about to leave, we met a local student, who, noticing that we were foreigners, asked us whether we saw the big diamond. We knew that there was a diamond up there but could never see it as it was too high. So he took us to a point where it was marked ‘R’ with a chalk on the ground and asked us to look up the pagoda. Now we could clearly see a red light which was refracted from the diamond up there. A few steps toward the pagoda, there was another mark ‘G’ on the ground and when we stand here, we can see a green light refracted from the diamond. Impressive, I must say!

Since the Pagoda was to close at 10pm, we decided to move out. We took a taxi back to our hotel and since we wanted to have dinner, we decided to try the local street food here. We found one and had some local noodles and soup. Nothing great, barely edible, I must say! After having the food, we decided to call it a day in Myanmar.

When we are getting ready for our international holiday, we are often stumped with this question on how we should...