Day 2: A trip to the Perfume Pagoda in Hanoi, Vietnam 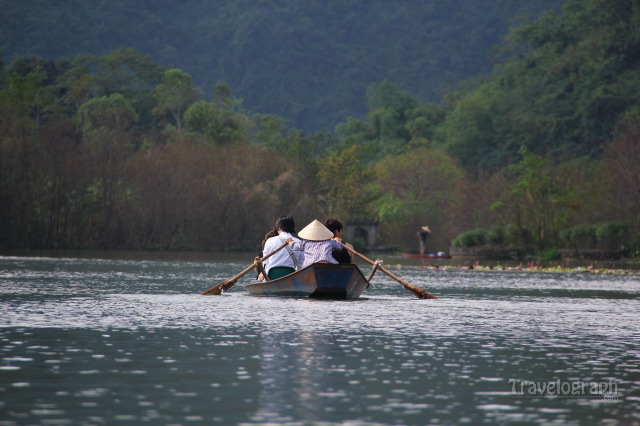 I woke up tired at around 6:30am. Twice, I woke up in the night to take medicines for fever. Thankfully, I was feeling quite ok when I woke up. Today, we were to go for a day trip from Hanoi through a package tour that we had booked at the hotel yesterday for 30$ per person. We got ready, had our breakfast and at 8:30am, the tour guys picked us up from our hotel and we moved on.

The perfume pagoda is situated in Ninh Binh province and is a 2hr drive South of Hanoi. It is a sacred site for the Buddhists but is also popular among the tourists for its scenic beauty and hence most of the tour operators offer a package for visiting this place as a day trip. We stopped one the way for a “restroom break” which was actually an excuse to make the tourists buy some souvenirs at a shop but even though I knew that I was being fleeced buying from here, I found it too irresistible that I ended up buying a few souvenirs too!! After the break, we again moved on. 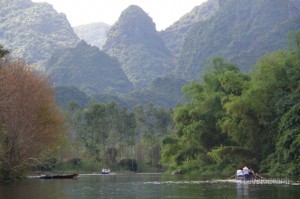 Finally, at around 11am, the bus stopped and we got down. From here, we have to continue our journey on a boat. Our guide informed us that the boats here are rowed by the women. The river was called the perfume river because of the fragrance of the flowers on its banks during the spring season. But since this was just autumn, for us, it was just an ordinary river. The boats were small, made of steel, and when all the eight passengers sit on it, it remains just 2 inches higher than the water! We got into one and we moved on.

Enroute, we could see a lot of tombs by the side of the river. The guide told us that people here believe that the closer their tomb is to the river, the easier is their way to heaven! Anyways, beyond those tombs, it was a calm and relaxing ride for us. The weather was just perfect. It was cloudy and hence wasn’t too hot. The guide was explaining the shape of different mountains, their resemblance to material things and the mythical story behind them. Altogether, an hour passed quickly.

We reached the foot of the hill and got down from the boat. It was past noon and hence we stopped for lunch. We were served some really good food but the only catch was that we had to use chopsticks! Now that was a challenge in itself. In our table, there was a couple from Japan and another from Holland. Surprisingly, even the Dutch were quite comfortable with chopsticks! Seeing our discomfort, the Japanese lady served us the dishes and we somehow managed to use the chopsticks to have the food. But once rice was served, we knew that there was no way we were going to have rice using chopsticks and hence asked the waiter for the fork and spoon. 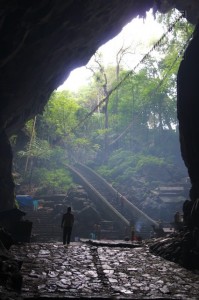 After the lunch, we moved on. From here, you can either trek 40min to the top of the mountain or take the easy ropeway route to reach there. The guide gave us a choice of using the ropeway for either side and we chose to take the ropeway uphill. So again, it was an easy ride on the ropeway to the top and we got down and walked again till we reached a huge cave. The mouth of the cave is huge and resembles that of a dragon. Inside the cave, there are many statues of Buddha and people come here to pray especially during the festival time of the new year.

At around 2pm, we returned from the cave for our trek down the mountain. We retraced the same route by boat to our bus and back to Hanoi. Altogether, we felt that the trip as nothing exceptional, but definitely a good outing from Hanoi for 30$, especially if you want to see the country side and experience a lazy ride in the river.

I woke up at 2:45am in the morning when the pilot announced our descent over the intercom. We were now...