Day 2: Traveling by bus from Kathmandu to Pokhara, Nepal

My morning alarm and the hotel’s wake up call went off almost simultaneously at 5:30am in the morning. Today, we were to travel from Kathmandu to the city of Pokhara in Nepal. While doing my travel research, I found a couple of travel options between Kathmandu to Pokhara. The easiest option was to fly and it would cost around 130$. But almost every forum mentions a word of caution about the alarming safety record of local Nepalese airlines. Either way, I do not generally take the flight option unless other options don’t exist or are impractical. So I decided to take the bus route to Pokhara.

In Nepal, there are different classes of buses to Pokhara. The most expensive (and premium),as far as I know, is with Greenline which costs 20-23$ and includes lunch coupons, onboard Wifi etc. Then comes the AC tourist buses costing around 700-900 NPR with air conditioning and Wi-Fi (more on this later). Last, there are basic tourist buses for around 500-600 NPR with no AC. All the tourist buses start from Thamel, which is the tourist part of the city. Apart from these, there are micro buses which cater to the local population for around 500 NPR. 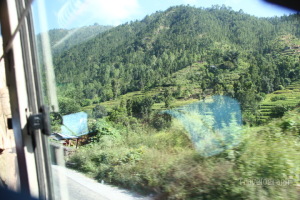 Yesterday, we booked for an AC tourist bus for 900 NPR. The bus was to start at 7am the next morning and we were to report there before that. The hotel guys packed our breakfast and we walked for 5min to reach the place where the buses start. We could see a long row of buses waiting to leave for Pokhara. Since we had already booked our ticket, we found our bus and boarded it.

At 7am, the bus started towards Pokhara. I pulled out my cellphone to see if I could get any wi-fi. Yes, there was a Wifi Signal and yes, I was connected to it. But to my astonishment, the internet wouldn’t work. Well, they promised wi-fi, but not internet, right? That wasn’t a big deal for me and I looked out at the sights outside.

The roads were bumpy at times, always winding and the terrain, mountainous throughout the journey. The view outside, is refreshing, but not exceptional. Since I had travelled on more beautiful stretches of road (say, Sonamarg – Srinagar, Phoentsholing – Thimpu, etc.), I perceived the view outside to be just another hilly countryside. We did stop a couple of times in the journey for food/ loo break. And by 2:30pm, 7.5hrs after we started, we reached the Pokhara bus station. We got down, took a taxi for 200 NPR (we didn’t bargain as we were too tired) and reached our hotel in Lakeside, Pokhara. 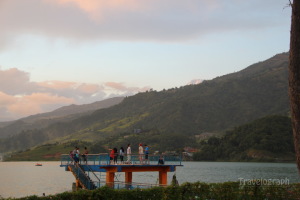 After a much needed nap, we went to explore the lakeside. In Nepal, whenever we wanted to have food, momos are our default options. Momos are meat-filled dumplings steamed to juicy perfection. They are so delicious- we can’t get enough! Later, we walked towards the beautiful Phewa lake in Pokhara. As we looked up, we could see the beautiful Annapurna mountain range in the backdrop. It was picture perfect. As I always say, seeing an 8000m mountain with your own eyes changes your very definition of a “mountain”. You have to look straight up into the sky to see the peak! After a short walk by the lakeside and a view of the sunset, we decided to call it a day.

One response to “Day 2: Traveling by bus from Kathmandu to Pokhara, Nepal”

Day 1: Watching Mt. Everest on the flight to Kathmandu, Nepal

"Sir, Howrah! Madam, Howrah!" I woke up to shout by the train attendant who was busy wrapping up used blankets. I...