Skiing for the very first time in Hidden Valley, Pennsylvania 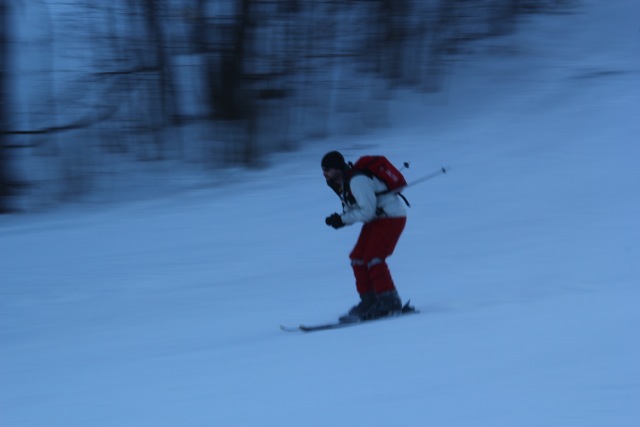 “Do you want to go skiing, Berty?”, asked Kara, my office colleague. “Of course I do!”, I replied her. Skiing was something that I always wanted to try here in the US. I was searching online about the various ski resorts nearby but since I did not have a car, getting to any of those was difficult. Since there was a group discount, we asked around if there were any more people who would be interested to ski. Thankfully, Tina agreed. She was just learning to ski and hence I was happy that she was coming too.

Finally, it was the day I was to go for skiing and Kara picked me up from my apartment. Kara doesn’t ski any longer but takes her 9 yr old daughter to the ski resort every weekend to teach her to ski. After packing a meal from the Boston Market, we moved on. After an hour’s drive, we reached the ski resort. 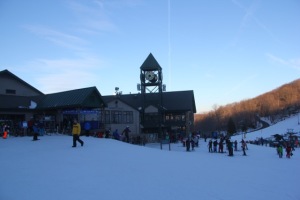 We got down and walked towards the lodge. Kara’s daughter already had her skis and so she went out to ski along with another family. I had already booked for a ski lesson, ski & helmet rentals and I collected the tickets and went to get the stuff from the ski shop. After a quick registration, I first collected the ski boots. Boy, it was heavy! And the boots were really tall and had a hard outer shell. I was trying to figure out how I could get my feet inside these. After being unsuccessful, I decided to ask for help. I asked a girl working at the ski shop on how I can get my feet in and she told me how to do that! So I finally managed to put my feet into the boots. As I stood up, I realized how difficult it was to balance myself to even stand in these! Remember, I have just put the boots on; not the skis! Once you put on those boots, you cannot even move your ankle by an inch. You have no idea how that feels like until you put one of those boots on!

I was never expecting this to happen. All along my way here, I was expecting the skiing to be difficult. And here I was, struggling to walk with the boots on. I even considered quitting at this point. But then I realized that I should at least give it a try after coming all the way here. So I started to walk in the hall with those boots on. I felt like a robot trying to walk. The only joint that I could move below my hip was the knee. And you should understand that without any ankle movement, you won’t be able to bend your knees and keep balance! I managed to walk little by little and when I was sure that I could keep my balance, I decided to get my skis. 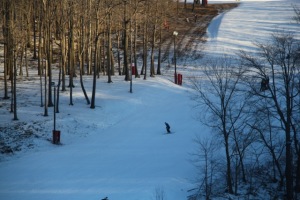 I slowly robot walked to the ski rental counter and asked for my skis. I got my skis and two poles. Now I had to carry them and get to the place where they have ski lessons. Stepping out of the ski shop was a challenge that I never expected. You have no idea how it feels like to walk down a few steps when your ankle movement is restrained! Somehow, I managed to walk out of the ski shop and get to the ski lesson assembly point. I met Tina here. Unlike me, she had taken a few lessons last year and hence this was not her first time.

Tina asked me to put the skis on. As if standing with the boots on wasn’t challenging enough, here I was, trying to put on a ski under those boots and stand on the slippery snow! With her help, I managed to put them on after much struggle. Honestly, I have to admit that I was hardly resting myself on the skis! I was using the two ski poles as crutches so that I could just stand. Forget about moving forward with those skis, I could hardly stay at the same place. 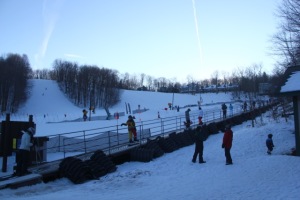 Soon, we met out ski instructors and they asked us to get our skis off. What a relief, I thought. They taught us how to walk on an incline with those boots on. The instruction was that we need to walk sideways and angle the boots towards the incline and walk up. Now we were asked to put on the skis. With great struggle, I put that on again. We were now asked to drag the ski sideways. After a few basic steps, we were asked to get to the top of a “baby slope”. To get there, we had to get on an escalator kind of thing. It took us to the top of the slope. We then assembled again with our skis on in front of a very mild U-shaped slope.

Our first exercise here was to ski! Thankfully, in my group, there were others who were doing this for the first time. So one by one, people started falling. It was my turn. With a gentle push using the ski poles, I started off the slope. As soon as the ski went over the slope, I lost my balance and fell backwards. I was down and the funny part is, I couldn’t get up with all these stuff on me! The ski instructor then came and helped me up. 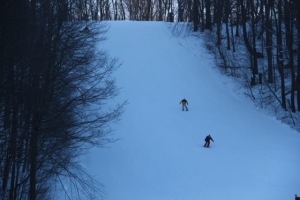 I went back to the top of the U-shaped slope again and started again. Well, it was the same result. Came back and did it again. Same result. I was feeling frustrated and embarrassed but since there were people around me who were also falling the same way, I had some consolation! The ski instructor then came and told me to push hard my shin on to the front of the boots, the moment I get off the slope. I tried that. Same result. I was almost ready to quit. But I wanted to ski at least once. So I went back and tried again. It was my fifth attempt. And miraculously, I skied this time! I didn’t fall! Now it became interesting and I went back and did it a couple of times more.

The ski instructors now taught us how to stop. The instruction was to bring the skis to the shape of a wedge with the front part of the skis close together and the back part wide apart. I tried that and I wasn’t sure if it was because of the wedge I created or the upward slope of the U-slope that stopped me, long story short, I did stop. They also taught us to turn. But this was something that I could never do. 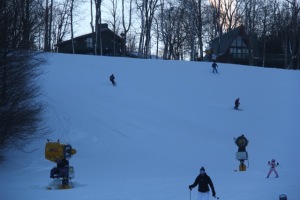 We were almost 2hrs into the lesson and we had to get down the baby slope. So one by one, we started going down in small stretches. I started off, skied for some time and when it came to a point where I had to make a turn, I couldn’t and hence had to fall down deliberately to avoid hurtling down the slope! I got up and then started the next stretch. This time, the slope was a bit steeper and when I tried to stop, it wouldn’t stop and I was turning instead. Again, I had to deliberately fall in order to stop myself. This continued for the next few stretches until we came down the baby slope. But I was happy at the fact that I could ski!

I was tired and thirsty and came back to the lodge and gulped down the Gatorade that I brought along. My wrist was hurting very badly because of the numerous falls that I had. I removed my skis and boots and sat down. I was feeling so happy that I could move my ankles once again. Content that I skied for the first time in my life, I soon got back to my apartment.

Note: Names mentioned in the article are changed for privacy.

I woke up early in the morning in my hostel in Cancun, Mexico. I am not sure if anyone came...